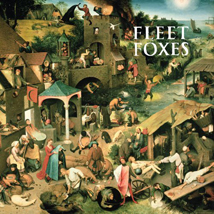 The obsession with hippie culture and ’60s folk that’s been simmering over the last couple of years is peculiar and cultish, a bit Manson, no? Seattle’s Fleet Foxes are a blatant nod to the nature lovers of yesteryear on one hand, yet barely-legal frontman Robin Pecknold will defend, at any chance, his opposition to the ironic consumerism in hippie culture, and the fact that he – adorned with the face of Jesus – is no hippie.

The band’s style is far too lumberjack for such a title, anyway. Pecknold himself has a gorgeous voice, elegant on its own but suited to harmonize with his band mates, like on “White Winter Hymnal,” a neo-traditional effort suited to a ... erm ... white winter. This full-length debut is too complex, layered and musically representative of moods and winter visions to be passed off as trendy hippie fare. Pecknold revealed via his label that, “We’ve succeeded for ourselves if we’ve made a song where every instrument is doing something interesting and melodic.” This standard in place, Fleet Foxes have more than succeeded.