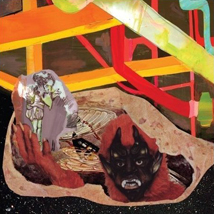 Well, it’s about time. Wolf Parade has barely made a peep since the fall of 2005, but now they’re back, and things have changed.

While some songs (“Soldier’s Grin,” “The Grey Estates”) would’ve felt right at home on the last album, “Language City” kicks it up a notch with a catchy keyboard-fueled breakdown, and other songs (“California Dreamer,” “An Animal in Your Care”) feel looser and include extended instrumental breaks, giving them more of a classic rock vibe.

Probably the biggest departure is album closer “Kissing the Beehive,” an 11-minute jam that in theory shouldn’t work, but somehow does. While not as instantly likeable as its predecessor, At Mount Zoomer proves that experimentation suits Wolf Parade, and where they go from here is anyone’s guess.

At Mount Zoomer is currently available.