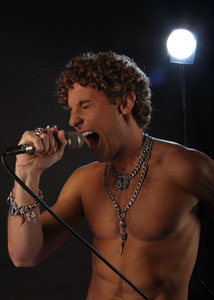 Sound designer and audio innovator James Johnson has brought the latest theatrical production of “The Who’s Tommy” to a new level of experiential entertainment with his high definition 3-D audio technology, which he’s coined “EXP3D.” Johnson’s latest technology uses an innovative mix of live and prerecorded 3-D audio that is then pumped into every person’s ears through Bose headphones, providing a first person perspective of what the characters are actually experiencing throughout the rock-opera.

It’s reality audio, really. When you’re sitting wherever you are right now you might hear a jet fly overhead ... or if someone walks up to you, you hear their footsteps on the floor. 3-D audio is like being in the real world.

What did you have to do in order to create the 3-D sound effects?

For the scene where Tommy’s dad goes off to war, for example, I wired up a WWII paratrooper re-enactor and actually captured the sound of him jumping out of a B-17, which is roughly equivalent to a Wellington Bomber.

So as that scene happens onstage it really sounds like you’re inside the hulk of a metallic plane with huge rotary engines. When the character jumps out of the plane you experience the parachute popping open over your head and the blissful 25 second drop. The result is a first person P.O.V. of Captain Walker. It took me over 22 hours in the field just to get that parachute jump.

How has “The Who’s Tommy” changed since its 1969 album release?

Now we have the technology to have this extremely personal experience of Tommy delivered individually to each audience member. Just by putting on headphones we’re giving everybody the best seat in the house.