Textbooks: Cost-Conscious Students between a Rock and a Hardback 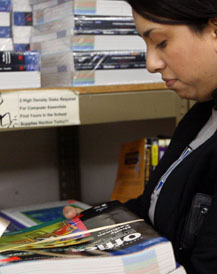 Lance Wiley paid about $400 in tuition this semester to attend community college.

Then he went to the bookstore.

"I spent another $400 on textbooks for my courses," said Wiley, 19. "It’s outrageous that textbooks cost that much."

Wiley, a student at Collin County Community College, seems to speak for the masses when it comes to college textbooks. Wholesale prices have increased 33 percent since 1998 and will continue to rise, according to a survey by the National Association of College Stores.

Students have long complained about the costs, but the hue and cry peaked recently when Congress held hearings on textbook prices. The Government Accountability Office, the investigative arm of Congress, began its inquiry into textbook pricing last semester.

Publishers and college administrators said they are working on ways to offer more affordable books. But high-dollar texts are likely to remain on the shelves for a while.

At community colleges, where students flock for inexpensive educations, they’re feeling the pinch.

"The science textbooks are the worst," said Ty Rollins, 21, a student at Richland College in Dallas. "Even the used ones cost $108."

"Even before they enroll, they see tuition, fees and books as being too much," Chesney said. "We know that some students try to get through the courses without the books."

After Richard Abney enrolled his daughter, Sasha, 18, at Collin County Community College, he expected to spend about $120 on books, he said.

The report also criticized publishers for adding "bells and whistles that drive up the price of textbooks."

"Everybody who ever went to college can remember saying that their textbooks cost too much," said Bruce Hildebrand, executive director for higher education with the Association of American Publishers.

But publishers argue that the books, unlike popular novels, often require the work of dozens of experts in specialized fields, which is costly, Hildebrand said.

And publishers can’t rely on high-volume sales to drive down prices, he said.

He disputed the criticism that new editions are put out frequently and with very little new material.

New editions are typically published every three or four years and contain updated information necessary to their fields, he said.

Students and administrators have also complained about books that are sold in bundles for specific courses, which drives the prices up. For example, a package of books for an advanced biology class costs $215. Hildebrand said publishers bundle books based on orders from professors or college committees.

Publishers and administrators have been toying with affordable alternatives.

Used textbooks are still a good option, said Dave Husted, director of Collin County Community College’s bookstore. They make up about 25 percent of the store’s sales, he said. Students can also buy or sell directly to one another.

"It’s an important part of our business," Husted said. "It saves students money. It’s good for everybody."

Publishers and bookstore managers have also talked about more basic texts – published only in black and white and without photographs and graphics that drive up production prices.

"If it contained the same material, I think students would choose the cheaper, no-frills books," Husted said.

Some publishers have begun breaking up textbooks into parts, Hildebrand said. One publisher’s calculus text, for instance, runs about $130, but it is used over three semesters. To reduce the cost, the publisher breaks it up into three books and sells them in softcover or in a spiral notebook.

"If there is a demand for modified texts, we provide it," Hildebrand said. "We’ll drive the cost down as far as we can."

Campus News
‘Race does matter’: Why Latino advocates are pushing for affirmative action in California
267 views

Campus News
What did it cost to open, then close, UNC System schools? Millions, with more to come
188 views