We Are Scientists: Evolution catches up to this Brooklyn band. 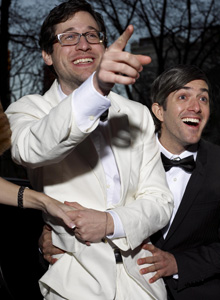 The perfect recipe for a great indie rock band: Take two parts talent and mix in one part quirk. Sprinkle with a little Brooklyn edge and serve it, piping hot to a music lover near you. That’s just what We Are Scientists has done to fans of its genre.

Lead vocalist Keith Murray and bassist/cohort Chris Cain (along with former member Michael Tapper) burst onto the national music stage with the 2006 release With Love and Squalor. The LP spawned the college radio hit “This Scene is Dead” and added this New York-based band to a distinguished list of memorable post-millennial favorites.

We Are Scientists is back with its latest release, Brain Thrust Mastery. The disc is a dangerous, danceable successor to past efforts and offers the next step in evolution for Murray and Cain. Even though they have been reduced to a two-fer, there’s still a lot of magic within the creative process.

From there, he and Murray begin to flesh out each track, deciding what instruments and extras they’d like to include on each. For the most part, it’s been an easy ride to great-sounding music. The only detour has been with the band’s single “Chick Lit,” which was re-tooled, at the request of their record label.

But don’t be alarmed: although this group is changing professionally, it still hasn’t lost its well-documented sense of humor, especially when it comes to the fans.

“I could be making a bit of a leap, here,” muses Cain, “but I feel like our fans are people in desperate circumstances – abyssmal, even – who need a little dose of We Are Scientists every once in a while.”

Cain’s reflections come during a tour break in which the band is in New York preparing to make its way across the country to play dates on the left coast. One has to wonder how musicians keep up with the stringent guidelines and day-to-day wrangling of a different town each day.

For the members of W.A.S, they don’t subscribe to hippie self-help mumbo-jumbo, nor do they go the way of the Beatles by cozying up to yogis for guidance. Instead, Cain admits that what keeps his head on straight is a good book and the occasional TV show.

“We read a lot, and we watch a lot of TV shows on DVD. [There’s] very little spiritual content to our day-to-day lives, which could be a problem,” he admits. “I just finished my first James Bond book, which was Moonraker by Ian Fleming.”

For indie rock’s best new find, We Are Scientists’ backstage antics appear a glorious contrast from that of its rock music predecessors. Not only do Cain and Murray seem to relish the same everyday activities of any good Brooklynite (spending time with their girlfriends; going to band practice), but they also don’t give into the trappings of the tour circuit.

He speaks just as candidly about the future of the music industry. When given a minute to sound off about his thoughts, Cain wastes no time: “From the musician’s perspective, I think the biggest adjustments are sort of in store for the labels and that they’re not going to exist in the forms that they currently exist in for much longer,” delivering a firm opinion ... just like any good Brooklynite.

Brain Thrust Mastery is currently available. We Are Scientists will perform July 1 at the El Rey Theatre, Los Angeles.