Candace Parker: The New Face of the WNBA 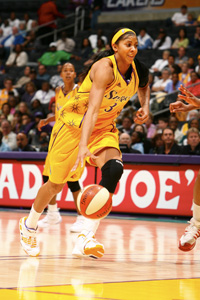 It’s a Wednesday night in downtown Los Angeles, and sandwiched between two NBA Finals games at the Staples Center is what most would consider a meaningless midseason game between the L.A. Sparks and the visiting Detroit Shock. But as I ride to the arena on a shuttle full of passionate fans, the talk doesn’t come around to Kobe’s game, the Lakers’ chances or Phil’s strategy.

You get the feeling that, surrounded on all sides by Lakers paraphernalia, this insulated group of fans could care less about the men’s team that invades “their” building. If Kobe exists in Los Angeles, it ain’t on this bus.

For a league that has struggled to exist over the last 12 years, it’s these Sparks and players like rookie Candace Parker who keeps fans coming back for more.

Parker’s transition to the professional level has been a quick one. Only 12 hours after walking out of the St. Pete Times Forum in Tampa, Fla. as a national champion with Tennessee, she was walking across a stage only miles down the road as the number one overall pick in the 2008 WNBA draft. She nearly recorded a triple double in her first Sparks win a month later and in August will be expected to help lead the national team to a gold medal at this year’s Olympics.

“I’m very excited to be on the Olympic team. I remember watching the ’96 Olympics on my couch and wanting to be there, and it’s a dream come true to represent my country,” she says.

Along with that burden comes playing in the shadow of WNBA great Lisa Leslie and adjusting to her new role at the professional level. While her height and footwork may have made her a post threat in college, her speed and agility makes her a guard in a bigger and faster WNBA.

Parker, along with Phoenix’s Diana Taurasi and Minnesota’s Candice Wiggins, is quickly becoming one of the faces of the youth movement now present in the WNBA. Even as a rookie, Parker’s effortless ability, proven track record and intense drive make her the perfect role model for young girls dreaming the WNBA dream.

However, it’s no longer just the girls that see Parker as the future of basketball. Throughout the Sparks crowd on any given night, she and the legendary Leslie are attracting more and more young men to the game.

“I look in the stands a lot,” says Sparks coach Michael Cooper, “and you see a lot more single guys that I think that are enjoying our game now. I think what we’re doing is slowly getting their attention.”

Now, Parker and her teammates will look to improve upon their 7-2 record, with hopes of chasing down the Sparks first championship since 2002. With a WNBA title and a possible Gold Medal at the Olympics on the horizon, Parker has to opportunity to become the first player to win a college, pro and Olympic title in the same calendar year.

At only 22 though, Parker has plenty of time to achieve whatever she wants. While many see her as the heir to Lisa Leslie’s throne, others see her as a “Michael Jordan” that can take the WNBA to a much higher stratosphere.

Whatever the case may be, fans of the Sparks riding that shuttle every night will have the same reaction.

The Los Angeles Sparks will play the Washington Mystics June 26 at the Staples Center. For more information, visit www.wnba.com/sparks.