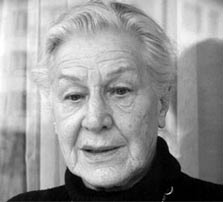 In a time when we are all looking seriously at the dangerous capabilities of a tyrannical leader, Austrian documentarian André Heller delivers a fascinating look at history’s most notorious political monster in his 90-minute documentary, Blind Spot. After almost 60 years of silence, Traudl Junge, who wasAdolph Hitler’s personal secretary from 1942 until his suicide, tells her story of life along side a man whom she, as a "poor fool," had held in the highest respect. Aware of the historical importance of her every word, Frau Junge calmly explains every absorbing detail of her impression of Hitler, from his unusually touching relationship with his golden retriever to his cold, detached gaze in the final days as he announced his future plans for suicide. Perhaps more fascinating, however, is Junge’s own experiences as a young, idealistic girl with dreams of becoming a dancer, being overwhelmed by a leader’s presence, only to find herself years later discussing the most efficient method to shoot herself should the Allied soldiers come to take her away. Junge poignantly reveals her own revelation that her close position to Hitler inhibited her ability to see the full effects of his daily actions. In her own bitterly wry words, she was in a national "blind spot."

As historical documentation, Blind Spot is a completely and utterly (ignore the modern commercial cliché) priceless. I was completely captivated by every nugget of goosebump-inducing information that spilled from this woman’s lips. As a film, however, I feel its necessity is questionable. The camera angles shift between two basic shots, both a close-up on Junge from the shoulders up. This, along with the fact that I don’t speak German and, therefore, ingested all of the information through subtitles, led me to feel that Blind Spot would be just as effective as a book (which it was) with an extended photo section. I cannot deny the historical importance of Heller’s work here, and feel that our civilization would be denied something brilliant without this woman’s confession, but despite the two small segments where Junge is moved to tears, the visual media used to present this information seems needless and, at times, stagnant.

But please do not take this as a reason to avoid seeing a film that, at this critical moment in history where we are being led to confront a leader whose monstrous capacities are unknown, is perhaps an essential part of our collective consciousness.