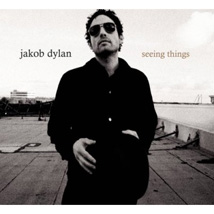 With the possible exception of the Lennon boys there are very few artists working today that have to live up to the fact that their fathers have made some of the most influential recordings of all time. As the son of Bob Dylan, Jakob Dylan has little to prove; his talents have been on display with the Wallflowers for over a decade.

But now with the release of his first solo album it’s likely that Dylan will be facing critical comparison to dear old dad. The two are polar opposites vocally; Bob is nasally and often fails to enunciate while Jakob’s voice rings clear as a bell on every note.

But Seeing Things is an album of rootsy acoustic material that uses sparse instrumentation and often just guitar, so in that respect, there’s a comparison to his father’s early work. Jakob’s music, though, is not oblique or cryptic; nothing here requires any heavy thinking.