The Myriad: With Arrows, With Poise
(Koch) 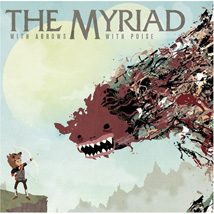 The Myriad call themselves indie artists, a word that typically doesn’t belong in the same sentence as MTV. But Myriad has caught the eye of the corporate giant, being named MTV’s “Breakout Artist of the Year” in 2007. Thankfully for this Seattle quintet, they are talented enough to teeter on the edge of the indie and mainstream music worlds.

“A Clean Shot,” off their new album, With Arrows, With Poise, is in rotation on MTV2, providing the masses with a snapshot of what can be found on the CD. Ambient sound, experimental drums and keys and rock that surrounds a room are highlights. Lyrically, the songs allude to something higher, creating ballads of uncertainty, hope and love.

This album generates a smorgasbord of emotions, and is something that’s extraordinarily different than what’s currently out. Expect to hear more from the Myriad. And don’t be surprised if this album tops MTV’s “Best of” lists for 2008.

With Arrows, With Poise is currently available.