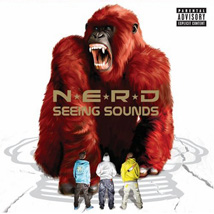 After a four-year hiatus from the Billboard charts, N.E.R.D. (No One Ever Really Dies) is back with Seeing Sounds, the third album to be released by the unique trio. Though their second album, Fly or Die, was able to reach mass appeal, there’s a good chance that Seeing Sounds won’t.

N.E.R.D., who are known for their unique blend of music by mixing guitar riffs over heavy drumbeats and melodic sounds, fall short of delivering good music. Lead singer Pharrell Williams shouts throughout most of the tracks on this disc.

N.E.R.D.’s four-year break should’ve been extended. Seeing Sounds manages to be as irksome as possible with the exception of two tracks, “Spaz” and “Anti Matter.” The album is garbage without the revolting smell.