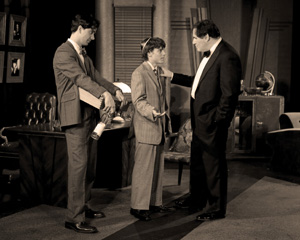 It’s 1946. Richard Kind as studio head Sam Baum is on the phone talking about making a movie on anti-Semitism.

He’s got competition from another studio that’s developing a film called Gentleman’s Agreement. Baum hires Oscar winner Garfield Hampson Jr., played by Hamish Linklater, a markedly gentile writer, through whose eyes and sensibilities the script shall be fashioned.

They take a meeting in Baum’s office, where Sam tells Hampson that this town isn’t big enough for two “Jew movies.” Via their banter, we learn what it’s like to be a Jew who has made something of himself in postwar America.

The actors are brilliant. Director Paul Mazursky keeps the pace going just right. Kind commands the stage, Linklater is properly scholarly as the writer and Gregory Mikurak, as son Adam, is letter perfect.