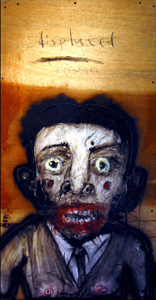 The idea behind 'A Thousand Words' was to explore how the visual arts might inform and inspire the creation of new theater. Nine playwrights from Padua Playwrights selected a piece of art from nine different artists from the Ladd gallery space and used it as the impetus for their short plays.

It was further conceived that the audience would sit down to watch the show and then have two intermissions to hang in a gallery, which included the work of the visual artists. The result is an interesting evening, if not a wee-bit obtuse.

The settings and scenarios imagined are wildly eclectic, including an ancient crypt in modern day Iraq occupied by an American mercenary to the stern of a pirate ship with a gaggle of real looking pirates. The fine troupe of actors makes the show consistently watchable. Yet, there remains an unresolved divide between the works of art and the plays.

The dramas in which the performers enact seem far removed from the soundless impact of the art pieces. This could speak to an inevitable clash between the two art forms, theater being about people and the plastic arts concerned more with space.