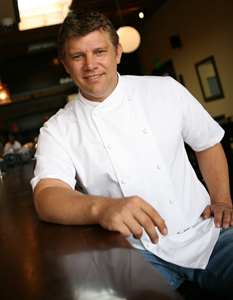 Benjamin Ford is many things. He’s a Culver City pioneer, gastropub innovator, man of the soil and champion of ingredients. Though some might dismiss him simply as a child of privilege with a knack for food (Harrison Ford is his father.), Ben Ford is a man of principle and ideals who learned his craft, literally, from the ground up.

“My initial attraction to food came through gardening,” he says one afternoon over coffee at his phenomenally successful Culver City restaurant, Ford’s Filling Station. “I went to a school where they taught gardening starting in the first grade. I had these epiphanies as a young person, putting my hands in the soil and forging a connection with the food I was eating.”

It led him to want to start cooking, and he began learning with his mother at the age of five.

“My mother was a very good cook. My home was one of those were kids would come and stay for two or three days at a time, fatten up before they go home,” he laughs.

Over the years, his devotion to food grew. While still in high school, he got his first restaurant job.

“When I was 15, I was sent to work in a professional kitchen to see if I liked what I was being taught. I [worked at] a restaurant called Greens in San Francisco which had their own organic farm.”

After college and a brief stint playing professional baseball before a career-ending shoulder injury sidelined him, Ford decided to return to San Francisco.

Ford enrolled at the California Culinary Academy in San Francisco.

“I was at the Culinary Academy, and I had to get a real job because I was doing laundry for my roommate so I could steal her change to have money to eat, and it wasn’t quite enough,” he says jokingly.

He eventually landed a job at Chez Panisse, “which I had to beg to get into,” he admits without pretense.

Chez Panisse is a legendary restaurant in Berkeley, Calif. founded by Alice Waters, one of America’s best-known and most influential chefs, who starting the organic food revolution. Chez Panisse is often referred to as the birthplace of California Cuisine.

“That place taught me what it meant to work in a business where everything was important and where it started with great product and the relationship with the farmers.”

During his tenure, Paul Bertolli was his mentor.

“This was a guy who would bring in half a cow and break it down with a handsaw in front of you,” Ford says with incredible respect. “This is a guy who does everything by hand.”

His time with Bertolli had a profound impact and ingrained his food philosophy.

“The secret to cooking is: the more effort you put into the dish the more it translates to the plate. It’s the effort that makes the difference,” he insists. “He also taught me respect for the whole animal, respect for vegetables, respect for ingredients in general.”

He brought that philosophy with him as he worked in some of Los Angeles’ best restaurants, including Opus and Campanile, before becoming executive chef at the Farm of Beverly Hills and then opening his own restaurants, first Chadwick’s and now Ford’s Filling Station.

“All of my restaurants are about connecting people to the food,” says Ford empathically. “At Chadwick’s, the servers were expected to go out and work in the garden so that when they talked about the ingredients, they weren’t talking about something they had no association with. If they go out and harvest the tomatoes, they’ll sell it differently when they get to the table.”

But Ford doesn’t stop there.

“We bring a lot of whole animals in. Yeah it’s scary, intimidating and even borders on gnarly sometimes,” he chuckles, “but it’s forging this relationship with a product.”

“This is a restaurant where the craft of cooking is still being taught,” Ford says with pride. “It’s being taught through gardening, real butchering, old school stuff that’s not taught anymore. The Cooking by Hand approach.”

Ford is so devoted to the concept that he’s hosting an evening dedicated to teaching the techniques as part of the Ford’s Filling Station Lecture Series.

“We started with ‘What the Hell is a GastroPub?’ The last one was a Head-to-Tail dinner because I feel it’s disingenuous not to use as much of the animal as possible. Next will be Cooking by Hand.”

The evening will be hosted at Ford’s Filling Station on July 14, and most of the lectures sell out in advance.

Ford believes a successful restaurant is “what people let you be. When you build something, you should build it 80 to 90 percent and then let the community finish off the final touches.”

The delicate balance is what Ben Ford and Ford’s Filling Station is dedicated to, both in the community and on the plate.

“The difference between what’s good and great can sometimes be the addition or subtraction of a single ingredient. You have to know when to say stop and when you need to layer something a little differently.”

Date Night
Some first choices for dining in L.A. after last call at the bar
1,666 views