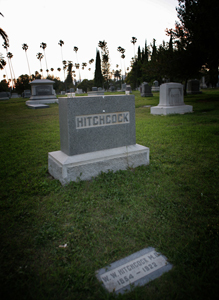 School is out, every day is beach-worthy and revival-screening series are moving operations outside. For Los Angeles’ classic film nuts, June means not just the beginning of summer, but also the return of Cinespia’s Cemetery Screening series at the Hollywood Forever Cemetery. That’s right – beach chair and boxed wine-filled walk-in movie nights on a vacant lawn at the oldest cemetery in the city – running every Saturday and Sunday night until jacket weather resumes.

The celebrities of yore might be dead all around you, but they are as alive as ever, projected on the side of the mausoleum which houses Rudolph Valentino’s body. Don’t worry, the idea may reek of sacrilege, but the result is more of an homage to mid-century Hollywood than a séance recipe (It’s also a great excuse to pack a picnic basket.) and, as such, the movie nights have become a L.A. summer staple.

So this Sunday, follow the crowd through Hollywood Forever’s wrought iron gates and check out a screening of Alfred Hitchcock’s second attempt at The Man Who Knew Too Much, where James Stewart and Doris Day take a trip abroad that “starts as a holiday and ends as a nightmare.” Filmed onsite in Morocco and London in 1956, The Man Who Knew Too Much was one of the infamous “Five Lost Hitchcocks” that were sold back to the family and not seen again until the ’80s.

Get there early for the dance party and by sundown, you’ll be singing along with one of Doris Day’s many renditions of the Academy Award-winning song “Whatever Will Be, Will Be (Que Sera, Sera)” and enjoying all the VistaVision and Technicolor splendor of Alfred Hitchcock’s most-forgotten finest. Don’t forget the director’s cameo about 25 minutes in (hint: he’s watching the acrobats in the marketplace).

Donations are accepted at the door, so give aplenty. And be respectful of those that have passed on. Because thanks to Hollywood Forever’s cemetery screenings, you’ll step back in time, but please not on the graves.