Maysoon Zayid: Laughing All the Way to Comedy Heaven 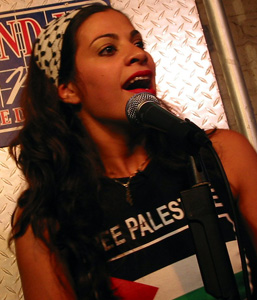 Stop me if you’ve heard this one. A Palestinian Muslim virgin with Cerebral Palsy from New Jersey walks into a feature film…

But it’s not a joke; it’s the true story of Maysoon Zayid, who makes her big screen debut in this month’s You Don’t Mess with the Zohan. Adam Sandler wrote the part specifically for Zayid after watching her stand-up act, which was why she turned to comedy in the first place.

“I was an actress, and I wasn’t going to get any work because no one is going to hire an ethnic, disabled, floppy girl. It just doesn’t happen,” she laughs. “So I thought about [how] other freaks [made] it. Whoopi Goldberg, Roseanne, Rosie O’Donnell, Ellen; they all started out doing stand-up comedy. I decided to do [it] so I could create a way for people to cast me. Nine years later it worked.”

Zayid is determined to fill the gaping lack of diversity on screen: “I grew up on ’80s TV. There was so much more variety, from Geri on the ‘The Facts of Life’ to Corky on ‘Life Goes On.’ There was fat, skinny, tall, short. Now the husband can be fat, but the wife has to be skinny, and disabilities are absolutely invisible.”

Far from invisible, Zayid has a gig at the Democratic National Convention this year, is developing a feature film version of her one woman show, “Little American Whore” and continues to work with her charity, Maysoon’s Kids, a program for disabled and wounded refugees and orphans, but, in her eyes, Zohan is the high point of her career.

“[I worked] with the greatest comic actor of our generation,” she gushes. “I got to watch him and learn from him. One day I walked in, and it was him, Kevin Nealon, Dana Carvey and Rob Schneider. I almost fainted. It was like comedy heaven.”