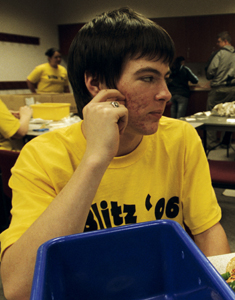 In anticipation of Paramount Vantage’s July 25 release of American Teen, Campus Circle asked each of the film’s five “teens” to sound off about college life and their particular areas of expertise. Below, Jake Tusing describes his month-long European trip. He will be a junior studying elementary education at Purdue University. This summer, he’ll be interning with IGN.com in Los Angeles.

I first traveled to Europe with my high school marching band when I was 16. We had an incredible time, saw many wonderful things, but we had to adhere to a strict schedule. That was what prompted me to go back and do things my way.

This time around, I was with a tour group for only 10 days. The next two weeks I spent alone. I had challenged myself to travel 2,000 miles with no plans for travel tickets, hotels or sights to see.

With the group, I enjoyed sightseeing in Italy and Greece, primarily Rome and Athens. After those 10 days, the sky was the limit, although I did have a vague idea of what I wanted to do.

Once the group left for the airport, I took a train from Athens heading north. As soon as I got on the train, I finally realized how potentially dangerous and sporadic this trip could be. Doing my best to keep an upbeat attitude and an open mind, I pressed forward into my adventure.

Within a few days, I had worked my way through Macedonia, Serbia, Croatia and Austria.

I decided to head into a different part of Germany than I had visited my last time around. I picked Munich.

When I got off the train, I was immediately pleased with my decision. Everything there was so clean and efficient. The public transportation took you anywhere you wanted to go and for a very reasonable price.

There was so much to see in this city, even though I spent most of my time gawking at things I didn’t recognize. It made me realize how little I knew about the world. I was standing in a huge city that had been there for I don’t know how many hundreds of years, and I had only known its name up until this point.

After a few days wandering around Munich, I took off for Amsterdam. I had heard so much about it.

On my way there, I didn’t expect anything more than a run-down, dirty city. On my arrival, I realized I needed to stop judging places before I saw them. Just like Munich, this city boasted much to see and do and had a history hundreds of years old.

I started running out of time quickly and made a jump to England.

As far as suggestions go for planning a trip, tour groups do allow for more affordable travel and help to relieve a lot of stress. Seeing things on your own is wonderful, but you have to be ready for anything.

I had to carry all I brought with me nearly all the time (I only packed one small backpack). I never knew where or when I was going to be sleeping or where and what I would eat. I didn’t carry any more cash than necessary for fear of my wallet being stolen.

If you do go the tour group route, find one that gives you a lot of freedom. It’s great seeing the sights that are world-renowned, but it’s the things you discover on your own that make Europe truly amazing.