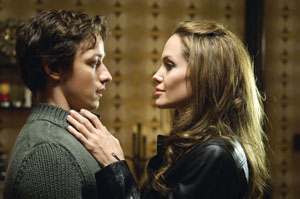 Wanted’s filmmakers should advise people to watch at their own risk – particularly if they have a heart condition. Director Timur Bekmambetov’s action thriller is like The Matrix ... on methamphetamine. Scottish heartthrob James McAvoy stars as Wesley. He’s a pencil pusher who is totally unhappy with his life.

When a mysterious killer named Fox (Angelina Jolie) comes to “rescue” him from a hit, Wesley becomes introduced to the world of the Fraternity. This is the 1,000-year-old brotherhood of badass murderers. The crew, led by Sloan (Morgan Freeman), takes Wesley into the fold and trains him to take down a rogue killer who has left the group. What makes Wanted a lot of fun is the fact that it is gratuitously violent, gory and silly. While the plot is somewhat corny and predictable, there are still some truly awesome and fun moments.