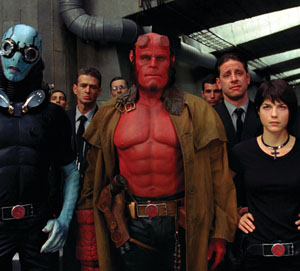 Guillermo del Toro is completely out of his mind … and it’s awesome!

The expectation defying imagination that captivated audiences with Pan’s Labyrinth is in full swing in Hellboy II: The Golden Army, his second turn as both writer and director of the comic book adaptation. Del Toro’s encore production is astonishing.

“I have always loved movies where the star is the monster. That has branded my view of art and storytelling all my life,” says del Toro.

From the moment he introduces a stop-motion battle sequence, you know the film is something unique and incredible. With impeccable CGI, the best prosthetics imaginable and unfathomably genius production design, he’s created some of the most amazing visuals in cinema; including an intoxicatingly beautiful ending to a gun battle that surpasses anything before in the genre.

“The less I conform, the more I love the movies [I make],” del Toro explains.

The director says he works to “shoot from a sense of awe as opposed to a place of knowledge and certainty.”

Luke Goss, who plays Prince Nuada and has worked with del Toro previously on Blade II, says, “When you get a script of his, you read it and, unlike any other filmmaker, even in your wildest imagination, you know you’ll see what’s on the page times a million on screen. It’s a very exciting feeling.”

Returning to her role, alongside Perlman as Hellboy, is Selma Blair as Liz Sherman. Blair was elated to be back with her director and co-star.

“There’s no comparison to Guillermo,” Blair says. “He creates a world unlike anything the audience has ever seen.”

Her admiration for Perlman is equally as heartfelt.

“He loves acting more than anyone I’ve ever met,” she says.

Perlman must be deeply infatuated with his job because the technical process of morphing him back into the character was a tremendous undertaking. His entire face was covered – along with much of his neck, arms and torso – in a procedure that typically required three hours in the makeup chair.

Yet Perlman couldn’t wait to get back into the boots of his favorite role, a character he describes as “deliciously robust to play … a complete underachieving, lazy slob … a beer-drinking, football-watching average American guy who has no desire to be a superhero.” Or, as del Toro puts it, is “only a hero in the moments he needs to be.”

“He just happens to have these abilities commensurate with where he’s from and who he is,” says Perlman. “His idea of a perfect day is pizza and beer and watching Marx Brothers movies. His extraordinary, superhuman traits are coincidental and not something he aspires to.”

His desire and penchant for the ordinary also makes him relatable, something del Toro feels allows the audience to glom onto in the film and its protagonists.

“I like these characters to be humanly relatable. I’ve always wanted to know who fills up the Batmobile, who patches Spiderman’s suit,” says del Toro, “It is my sincerest hope that you find resonance in the movies I make. I would love for people to find within Hellboy movies their favorite monsters,” he says. “We all need monsters to dream.”

While many action films are leaning toward the cerebral, Hellboy II is filled with brilliant fight sequences, intense battles, continuous action and good old-fashioned one-liners in the John McClane/Die Hard tradition. But what takes this film to a new level is its ingenious director.

Interviews
'Crazy Rich Asians' made Henry Golding a star. Now he's showing Hollywood everything he can do
55 views

Interviews
Mary McNamara: After losing a child, 'Pieces of a Woman' filmmakers channeled their grief into art
428 views