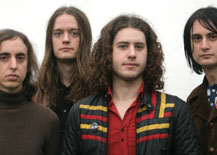 The Datsuns understand the value of patience.

With a reputation for its frenetic, high-powered stage shows, the band began to gain a full head of steam in the past two years on the strength of positive reviews, particularly in the British press, for its a self-titled debut album in 2003 and solid sophomore effort, Outta Sight/Outta Mind (V2 Records), in 2004.

"On the first record, everything’s pretty much foot to the floor," recalled de Borst. "It kind of felt like a singles collection or something like that. Because, in a way, we were doing that. ... But with the second record, there’s definitely songs we recorded for that. I think we recorded 14 songs and ended up leaving a couple off, which, I think, actually are amazing songs."

While contemporaries such as The Strokes and The Vines stumbled with releases last year, The Datsuns continued to make strides forward. Outta Sight/Outta Mind serves up the group’s signature music punch infused with musical influences ranging from hard rock and punk to ’70s era glam rock. De Borst noted, for instance, that the group went for a glam edge on the Outta Sight/Outta Mind number "You Can’t Find Me." Another tune, the thumping "Messing Around," likewise offers a touch of glam, accented by a decided ZZ Top-Texas style bite.

Jones applied a subtle touch to the album, leaving no hint of an overt Zeppelin footprint on it. If there’s aggressive Zeppelin-like thrust to be found anywhere, it is the final track, "I Got No Words." Buscke explained, however, that the song actually derived from a riff the group had toyed with for some time.

"It was kind of like a riff that we had around for a long time, and we didn’t really know what to do with. We used to just jam with that riff at sound checks and stuff like that."

Originally called Trinket, the group changed its name to The Datsuns after it won a "battle of the bands" competition in New Zealand in 1997. Each band member soon adopted a Datsun surname, as a way to distinguish themselves from players in other bands with similar names. In 2004, The Datsuns relocated to London to be closer to the music world pulse.

While the band’s albums show its musical growth and have enjoyed positive feedback, the group feels more at home on the stage than in the studio.

"I think we’ve always been a band that comes from performing and playing live to people," observed De Borst. "And we’re kind of making the transition to being both, making it 50-50, which I’ll never be comfortable with, because I always kind of believe that performance is the most sort of honest way to playing music and getting it across to people."

Yet, the frontman also added that there’s still plenty of room for the growth in the studio – but at a deliberate pace set by the group.

"We’re still kind of looking to make a record that really defines us, and puts our foot down as not just as really good performers, but as songwriters. ... We’ve only made two records the whole time we’ve been together. And usually bands don’t even last as long as we have. I think making the next record we’ll take a lot more time."