American Teen's Hannah: Leaving Home: It's All About Perspective 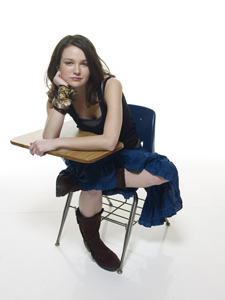 In anticipation of Paramount Vantage’s July 25 release of American Teen, Campus Circle asked each of the film’s five “teens” to sound off about college life and their particular areas of expertise. Below, Hannah Bailey talks about tomatoes and taking her hometown for granted. She’s studying film at SUNY Purchase in New York.

I was asked to write a short column about moving away from Indiana after high school. Now, I’m sitting on the couch, staring at my first sentence, wondering where to go from here.

It’s not that I don’t have anything to say; I always have something to say. It’s just that, well, I’m watching Steve Carell on “Larry King [Live]” right now, and I’d rather just continue watching than try to write this.

(45 minutes later...) Yes, OK, the show is over and now I am ready to write! What am I supposed to be talking about? Moving away from Indiana?

My grandma just told me that writing about tomatoes would be more interesting. I agree with her. What is up with this tomato crisis? I went to Taco Bell the other day, ordered my regular (three Supreme Tacos), and was flabbergasted to discover that they were missing an essential topping: tomatoes!

How is one supposed to consume a taco without tomatoes? It’s ludicrous.

Although, my buddy Clarke and I just went to Subway about two hours ago, and I got a turkey sub with none other than tomatoes! What a pleasant surprise to eat tomatoes again.

You know, all this talk about tomatoes really gets me to thinking about high school, specifically senior year, and even more specifically, graduation. If you take how excited I was to eat a tomato again and multiply that by 100 or so, you’d get the excitement level I felt as I left Indiana.

Despite the extreme suck level of my senior year of high school, as I look back, I realize that boy troubles, paranoia and depression were only side effects of a serious lack of self confidence. Although my nerves did increase a bit by the time I was ready to tell my parents I was getting the hell out of the Midwest, I know now that my heart was not entirely in the right place. Running away from my problems was not the answer, which I learned a few months later when I knew that I had to return home and confront, rather than simply flee from, my troubles.

Not that moving to San Francisco was all bad. I worked an extraordinarily boring office job, which only inspired me to go to college and do what I love that much more.

It was a great place to do some serious reflecting. With all that time for thinking, I started to realize that self-assurance is where it’s at, and self-pity is for bitches.

A year after I had left Warsaw, Ind. with no plans to return, I went home and did everything that I had always wanted, but never had the balls to do. I confronted a mortal nemesis and realized that jealousy and competition are bullshit. I hung out with my mom. I “casually dated” for once.

I gained a new respect for Warsaw and realized how much I had taken for granted during high school. By the time summer ended, I was completely ready to leave again, this time to film school in New York.

I guess what I’m trying to say is, it’s all about perspective. It’s easy to take advantage of things if you never experience life without them. Like tomatoes!

My grandma just told me that my second paragraph is already outdated, that the crisis is over. All I have to say is, “Good, I’d rather be wrong than never eat a tomato again.”