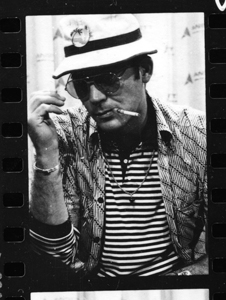 Outrageous journalist Alex Gibney’s latest doc on the life of the constantly outrageous Hunter S. Thompson brings humor and insight in one concise package. Humanizing such a controversial, larger-than-life figure has its challenges, but Gibney pulls it off well.

The film is aided by the presence of interviews with such people as former President Jimmy Carter and musician Jimmy Buffet. Narrated by Johnny Depp, this is an intimate portrait of a man who wanted to see change in his country but seemed overwhelmed by its vanities and temptations.

Some of the people who knew Thompson well say that he could have activated real change, if only he had dedicated himself to the task a little more. Here we have a Don Quixote, masquerading as an American journalist, a brilliant satirist with a sharp and hilarious pen.

As with every tragicomic character, though, he suffered profound sadness. In 2005, he took his own life with a bullet through his head.

Overall, the film chronicles the rise and fall of Thompson, with all his “fear and loathing,” in a way that manages to be reverent and poetic in the very same breath. At the hands of a filmmaker that knows how to weave a story together from actual evidence and fact, the legacy left by Thompson gains new momentum.