Mia Doi Todd: Life is Art and Art is Life 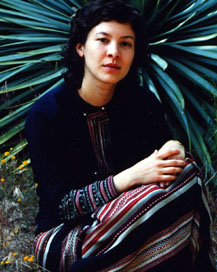 Todd is an artist of many mediums. She crafts her own clothes, is a student of Ankoku Butoh (an avant-garde Japanese dance movement), works on visual art projects (her father is a renowned sculptor), and admits that she finds even everyday chores creative.

"Cooking is an art form I practice daily. Life for me is all about art. I barely exist without it," Todd says.

Todd’s raison d’être is her music, which evokes Joni Mitchell, Elliott Smith and Nico, among others. Todd began writing and playing live shows 12 years ago, issued four critically well received albums from 1997 to 2002, and was briefly signed to Sony.

Todd’s fifth and newest release Manzanita (Plug Research) is, like Todd’s previous recordings, a showcase for a broad sweep of human emotions.

The record ranges from dark psychological depths to self-doubt, recrimination, optimism and redemption. The 10 tracks extend from melodic Southern California-drenched "What If We Do?" to reggae-inclined "Casa Nova." Todd inhabits her autobiographical material, her sublime and incisive voice, and singularly phrased singing to produce a compelling potency.

On stage, Todd can quiet a raucous rock club in seconds, and on her album, is just as penetrating. Todd always keeps listeners’ attention, partly because she seldom holds back lyrically, cutting straight to the essence of her life’s most serious moments.

"Happy songs are harder to write than sad, melancholy ones," Todd notes. "I don’t know if I’ve succeeded in writing a happy song yet. Some on this album approach that more than ever before, but they are all still melancholy, I think, though hopeful. My songs reflect the emotions I’ve been going through during a certain period of time."

You can hear Todd’s tentativeness about starting a relationship on unadorned, acoustic "My Room is White," where she describes the possibilities that come from a first kiss, "Are we going to give up or are we going to try?"

She examines the same game of chance that can beset budding romance on rock tune "What If We Do?," which has the most beautiful melody Todd has conceived to date. There’s definite, real-life experience to her observations: "We sit in the grass and we talk of our pasts/A roll call of all our lovers/A feeling arises we both recognize/We could fulfill each other."

In Todd’s worldview, everything is intertwined. In "The Way," Todd marries the personal and political, creating a distinct confessional narrative: "We built our house of cards on ignorance/A landfill of deceit/The walls are hollow and we listen/Worry what they will secrete."

Stark piano ballad "Muscle, Bone & Blood" illustrates how frail self-consciousness can be: "I am a human being/I’m made of muscle, bone and blood/I’m full of awful feelings, self-hatred and mistrust." Yet here, though Todd acknowledges she’s a reckless woman who can make a mess of situations, she has hope for something to ease the heartache: "I need you now to put your hands on me/Let’s give it one more shot."

During "Muscle, Bone & Blood," and indeed throughout her entire body of work, Todd displays an ability to avoid the sentimental stickiness that numerous soul-searching, singer-songwriters surrender to. While Todd’s expressions and communication are firmly rooted in the troubadour mold, rather than simply simulating the form, she has the rare gift of sounding like no one else but herself.

Manzanita is currently available. Mia Doi Todd will be performing on Feb. 7, 14, 21 and 28 at The Echo in Los Angeles. She will also play a live show at Amoeba Music in Hollywood on Feb. 9 at 7 p.m. For more information, visit www.miadoitodd.com.