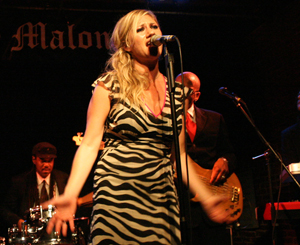 Wednesday night, hump day, and the back room brick walls of Molly Malone’s are lined with the sweating followers of Lucy Woodward and her red tie and blue blazer-sporting band.

Accompanied on vocals by Greg Clark, Woodward starts the show off with a “Hit it boys” that makes the venue feel like a New York underground speakeasy from the 1930s. As ceiling fans help reposition the beads of sweat from forehead to neck, Woodward’s sultry lyrics spill out into the crowd and cause simultaneous group vibing.

She has the kind of voice that sounds good just breathing into a microphone. It seems like at least half the club knows her, giving the night a jovial togetherness.

Her set builds up to “Hot and Bothered,” which she tells us actually came from a Yiddish lullaby her grandma used to sing to her. If only we all could be sung to sleep by such music.