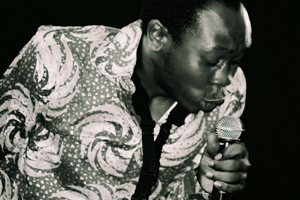 The youngest son of the late Fela Kuti, Seun Kuti is primed to be a lifelong bandleader – bold speaker, blunt lyricist, wide stage presence. He is his father, down to his dancer’s build and now-retro, high-waisted yellow pants.

Seun quivers with speed, flails and contorts until every individual muscle is visibly dancing with him. His eyes are piercing and expressive, and his hands play a large part in his every move.

Were he still alive, I doubt Fela would have instructed a crowd in booming Pidgin English to check them out at “MySpace dot com,” but Seun maintains a lot of Fela’s style and big band tradition, even as an apparent hip-hop fan and as someone nearly 50 years younger than the oldest member of his inherited band.