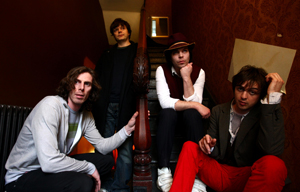 As one of England’s premier and long-standing rock acts, Supergrass still has mass appeal entering their 15-year mark.

Without missing a step, Supergrass’ journey from their humble debut, I Should Coco, to the recently released Diamond Hoo Ha, has been nothing short of extraordinary. Led by frontman and guitarist Gaz Coombes, his brother, keyboardist Rob Coombes, drummer Danny Goffey and bassist Mick Quinn, Supergrass is set to reclaim their Crown of Excellency with their new CD and tour.

2005’s play-on-words album, Road to Rouen, which was recorded in Rouen, Normandy, France, marked a very rough period for the band. Not only did the death of the Coombes brothers’ mother delay the album, but band tension also had a hand in the mess. Although commercially it became their worst selling album to date, critically it was well received.

Supergrass has seen more peaks than it has valleys, and all of that is reflected in Diamond Hoo Ha. Their lyrical and musical maturation is clearly evidenced in the current single, “Bad Blood,” and “Whiskey and Green Tea.”

Growing up doesn’t necessarily mean getting boring when it comes to Supergrass. They still have the quirkiness of their “Caught by the Fuzz” days as heard on album opener, “Diamond Hoo Ha Man,” and even a morose side with “345” and “Rough Knuckles.”

Steadfast to their ideals of “making it all about the music,” the band bounced right back and delivered Hoo Ha earlier this year to extreme praise. The rest of the world was able to enjoy Diamond Hoo Ha in March, but for U.S. fans, the three-month lag was a long and agonizing wait. Some fans just bought import copies.

Now that the wait is over and the release date has come and gone, Gaz can’t wait to begin touring.

“We’re all very excited about touring the states again,” he explains. “In fact, we’re jumping up and down right now.

“I always love playing Los Angeles,” he continues, “but we’re also looking forward to playing dates in markets that we’ve never been to before.”

Supergrass has a tendency to run into characters while on tour. In 1996 they had a chance encounter with the infamous English train robber Ronnie Biggs in Brazil. The notoriety from that run-in is evidenced in their “Going Out” music video.

In 2003, an escaped convict managed to hop on board their tour bus in Texas. Although these frightening experiences never resulted in anything other than interesting stories to tell their family, friends and fans, they’re done with meeting characters like that.

Right now, Supergrass is focused on ensuring Diamond Hoo Ha is a success. Gaz sees the new album as a puzzle piece, “because it fits right in with our other five albums,” he says. “I see it simply as album number six.”

According to him, the intent of the new album is to make you feel like you’re seeing Supergrass live.

Diamond Hoo Ha has brought the band the opportunity to tour in support of the Foo Fighters this summer. In addition, they will also play some headlining off-dates.