The Fratellis: Here We Stand
(Interscope) 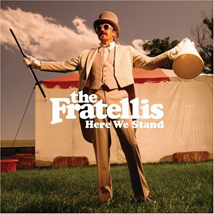 2006’s Costello Music quietly established the Fratellis as Glasgow’s meathead hit, though from this American’s point of view, it was actually a special sort of record that told cheeky stories of boys and girls, woven between all sorts of guitar texture and gibberish choruses.

Their sophomore effort feels like a bit of a slump until halfway through, when it suddenly drops most of the arena-ready shtick that Costello Music pleasantly lacked. But there is inconsistency on the whole; “Stragglers Moon” has a heavy twang, “Babydoll” and “Acid Jazz Singer” are welcome breaks from the flat, heavy guitar that mostly dominates here, and “Lupe Brown” is essentially mod arena rock.

But it’s closing piano build-up “Milk and Money” that wins, despite having nearly not made the cut, and shows a hint of where the Fratellis will hopefully be in time.

Here We Stand is currently available.