Martha Wainwright: I Know You're Married But I've Got Feelings Too 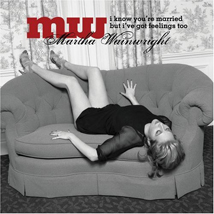 Being known incessantly as the daughter of Loudon and the sister of Rufus must get on Martha Wainwright’s nerves. Still, she compensates by singing angsty and belly-button gazing songs filled with sorrow and anger on her new album, I Know You’re Married But I’ve Got Feelings Too.

Successful at capturing a mood, like the songs featured in the underrated Laura Linney-Topher Grace film P.S., Wainwright sometimes stumbles into same-iness and self-pity. At her best, in songs like, “You Cheated Me” and “Niger River,” Wainwright’s intelligence and wit shine through and lift the material above the girl-in-a-coffee-shop genre.

At worst, in songs like “In the Middle of the Night,” Wainwright’s screechiness and vitriol feel like a bad Alanis Morissette parody.

I Know You’re Married But I’ve Got Feelings Too is currently available.