Princeton: A Sweet Sound to Crave 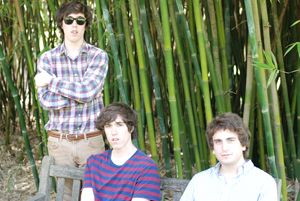 When most people hear the word “Princeton,” images of one of the top-notch Ivy League schools in the county is the first thing that comes to mind. But in Eagle Rock, three musicians, collectively known as Princeton, have crafted a sound that is as indie pop as it is intellectual and substantive.

Princeton is comprised primarily of twin brothers, Jesse and Matt Kivel, and their best friend, Ben Usen. These childhood friends attended all the same schools, while individually being interested with and practicing various musical instruments.

In high school when the Kivels got their guitars, they instantly formed a band and started writing music. But it wasn’t until the three of them met up while studying abroad in London that Princeton was formed.

During that time, the band played various live shows in little tiny dive pubs. “We played as many shows as we could, and it was really interesting,” recalls Usen. “Some of the places didn’t even have a stage.”

This enthusiasm for making and playing music carried over across the sea when they moved back to Los Angeles after finishing college. Since their time in London, Princeton have continued playing live shows and fine-tuning their sound. They have opened for a number of established acts such as Au Revoir Simone, Vampire Weekend and Saturday Looks Good to Me.

With Bloomsbury, their second EP (due in July), Princeton have carefully crafted four delicate, intimate and sparking songs. The concept for the album, which is based around the literary collective from London in the early 20th century, started because Jesse had written songs about Leonard and Virginia Woolf and Matt had written songs about John Maynard Keynes and Lytton Strachey.

Despite the heavily academic history that these songs are based on, the music is devoid of pretentiousness. Each tune is filled with various instruments, from the traditional guitar and bass to more quirky and unique instruments like banjo, harpsichord and lap steel. The playful layering of these various instruments, along with the earnest vocals, gives each a sweet and romantic sound that’s easy to appreciate.

But what Jesse feels is fun about the EP is that listeners can enjoy it on two levels.

“The songs aren’t bogged down by the concept. They are still easy to listen to even if you know nothing about these people,” he says.

But there appears to be an acute awareness that all too often music focuses on immediate gratification. And while he says that even he enjoys that aspect of music, he feels that it “shortchanges musicians who want to put really interesting and cool things into music when people are only listening and skimming the surface as passive listeners.”

Jesse hopes that by making this EP with a story and concept behind each song it will “make you more of an active listener where you have to investigate and find more meaning in it.”

The songs’ sounds, intellect and style are reflected in each of the band’s core members. They are as focused and in tune with their music as they are with the image they convey onstage.

Because they seem well versed and knowledgeable about great music, both current and past, it would be easy to compare these guys with many notable and respectable acts like the Kinks, for instance. But it seems more fitting to compare them to the love of sweets that all the members seem to indulge in. Just like good pastries and doughnuts, the Princeton sound is sweet, fresh and always great to share with friends.

Bloomsbury will be available July 8. Princeton will perform every Monday night in July at Silverlake Lounge. For more information, visit www.princeton-band.com.