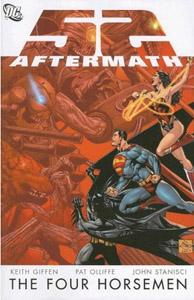 The success of 52 has given all new meaning to the “limited series,” spawning numerous spin-offs and elaborations. After the cataclysmic events of 52, the Four Horsemen – nightmarish weapons of scientific creation, embodying War, Famine, Pestilence and Death – were unleashed on the world, driving demigod Black Adam mad when they killed his family.

Now they’re back, raising an army of the dead. It’s up to the world’s greatest heroes: Superman, Wonder Woman and Batman, along with the very scientists responsible for the Horsemen, to save the Earth.