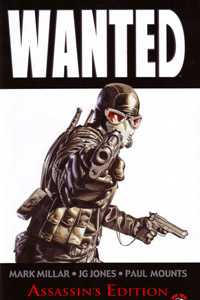 A relentlessly nasty work, Mark Millar’s Wanted is set in an inverted comic book universe, where all the superheroes are dead and the villains secretly run the world.

Stuck in a dead-end life, Wesley has been a pushover his entire life. Until his father, who just happened to be the world’s greatest assassin, is killed, and the secret union of supervillains approach Wesley with an offer he can’t refuse.

Packed with more sex, profanity, exploding heads and colorful character names than any book in memory, Wanted hints at greatness, but falls a little short. It’s still a great read and now a big screen adaptation.

This new hardcover edition includes Wanted: Dossier, behind the scenes materials and an introduction by Brian K. Vaughan.