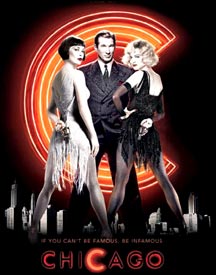 This film is a white-hot crowd-pleaser that proves you don’t have to shove a bunch of quick-edit excess and Baz Luhrmann bombast into a musical to make it modern and enjoyable.

This cinematic adaptation of the Kander and Ebb musical Chicago unfurls at a breakneck pace, sending us deep into the murderess’ row of Roxie Hart (Renee Zellweger) and Velma Kelly (Catherine Zeta-Jones).

The time is the Roaring ‘20s. Roxie murders her lover in a jealous rage, while wild Velma takes out her big lug of a hubby (the always in control John C. Reilly), claiming she blacked out and doesn’t remember how it happened. Both end up in the Windy City clink and take the services of hotshot lawyer Billy Flynn (Richard Gere, who CAN sing).

But faster than a T-Mobile commercial can annoy the pants off of you, we are charmed by two actresses with surprisingly perky pipes and some killer dance steps.

Staged more like A Chorus Line, in that it puts the characters’ fantasy lives on a stage with flashy floorshow numbers, director Rob Marshall keeps classic fans of the Broadway hit happy, and introduces those who missed the stage version into a helluva hybrid world of glamour and dreams.

The plot thickens when Roxie becomes more popular to the scandal hungry press than Velma. Both Zellweger and Zeta-Jones pull out the cat claws, shooting looks at each other that can kill and deliver songs in the cell blocks that will have your skin sizzling.

The only drawback is the film hews almost too closely to the stage version; the finale is virtually telegraphed to the audience before it arrives. Toe-tapping numbers, visual surprises and slick art direction cannot make up for a straight-shooting plot.

But everyone should be intoxicated by the glitz, seduced by the kicks and grabbed in by the gals. Also, some comedic hijinks with Gere playing it goofy and loose for once also keep things lively. Chicago is just too hot in some parts to cool down so much in others. Grade : B