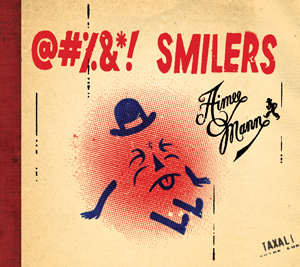 Pre-Script: @#%&*! Smilers is the title of Mann’s latest CD, there are no standards and practices requiring Campus Circle to change some obscenity into a string of SHIFT-numbers.

At the one-night only release party for the CD at La Luz De Jesus, attended by Taxali and Mann, I attempted to get the singer-songwriter, best known for her haunting vocals in the film Magnolia, to tell me just what swear she had in mind. I should have known that she’d be as shy as her songs, and Mann would only, eyes averted, suggest: “You can put your own curse word there.”

I had to look elsewhere to find that the title comes from a phrase the Oscar-nominee and a friend would use to mock the shiny, happy people who relentlessly engage in the showing of their teeth. But with whistling, Wurlitzers, Clavinets and synthesizers, along with the cartoonish artwork of Taxali, this may be the least lonesome sounding – and looking – of Mann’s albums; and probably one of her best.

Taxali’s artwork, some still available for purchase at the gallery and online, perfectly illustrates each of Mann’s songs. With his signature collage style that combines printmaking, cartoon characters and hand lettering (often using the inside covers of old books as his canvas), Taxali visualizes track No. 8, “Great Beyond,” as a hobo with bindle (a bag on a stick) disgustedly walking towards a red tree. Track No. 1, “Freeway,” is a minimalistic penciled car beneath the underlined words, “You know it,” and in the corner, “just show it.”

Some of the pieces include doodles that Mann sent Taxali during the collaboration, which the illustrator said were his favorite part of the production. Only when I mentioned Taxali’s admission to Mann (after bombing with my initial queries) did she finally break into a @#%&*! smile.