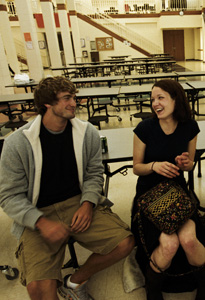 This movie is an odd animal, something I’ve found very difficult to judge, but before overthinking it, I’ll simply offer my gut reaction; and that is, at its core, Nanette Burstein’s American Teen is a supremely engaging, wickedly bittersweet – and sometimes hilarious – take on Midwest (read: white) high school life. It doesn’t pull many punches, and moments of it feel so raw and personal you’re almost embarrassed to bear witness.

One of the great triumphs of the film is that it actually delivers on its implied promise of allowing us to mock and laugh at the stupidity of youth (or our understanding of ourselves), while still finding each kid a “snowflake” in the end, that nothing is as it first appeared. There’s a rare, honest sense of having our cake and eating it, too.

But learning about a person isn’t always a pretty process. When we see initially lovable, gawky Jake from the marching band unwittingly hurt a girl’s feelings (he says, she “sucks at life,” like him), the look on her face changes things.

Jake’s no longer a harmless victim – now he’s the one doling out the pain, and it’s uncomfortable to see him this way. It’s not that he’s become a bad guy, just frustrated – just like most people out on their luck.

There’s a similar reversal with Megan, the overachieving class bitch, wherein we have a disturbing moment of insight. We learn this not through her, who has built up a wall to things like weakness, but through her family.

And the wonderfully real thing about American Teen is, this doesn’t excuse any of her behaviors. She’s not morally vindicated by the film, and she remains who she is. But as an audience we see her in a new light, and if we still don’t excuse her we realize that we can’t really condemn her, either.

The real standout here though, whether planned or not, is Hannah Bailey – the artsy, freethinker with dreams to leave small town Indiana for film school out west. In a community where bland, tech J.C.’s are pushed on the kids in the high school classrooms, Hannah’s views (and her charismatic, carefree attitude) are frankly insidious.

And it’s because of this you’re immediately behind her. She’s the most fun character to root for in recent memory, and that makes her stumbles all the more heartbreaking.

But, there’s also an incendiary side to American Teen, something maybe a little disingenuous that calls into question the very nature of documentary films, and at the very least needs to be called out. Put simply, when the Sundance award-winning documentary began, I immediately recognized it as a “mockumentary,” or, probably more accurately, something akin to “The Hills.” (I got over it after 10 minutes and proceeded to enjoy the film for what it was, which happens to be far superior to “The Hills.”)

In spite of my reservations about its presentation format, American Teen is forged so assuredly that I’m willing to let it go. Whatever you call it, and however manufactured or not the process was, Burstein’s creation rings true as a storytelling device. The kids here show us glimpses into real lives, which are alternately filled with warmth, desire that sometimes turns destructive and much humanity.