The Black Ghosts: Striking Fear in the Generic 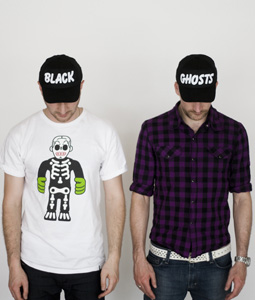 The idea of the DJ and his or her function is inherently tied to pop music, for better or worse, with all the connotations attached to the fluidly defined genre. London natives the Black Ghosts, however, are set on taking things one step further and using their roots in the British electronic music scene, along with their love of all things infectious and dance-worthy, to bridge the gap between the two.

While some of their better-known contemporaries have done much to bring DJ culture into the realm of the mainstream music listener’s consciousness, the pairing of producer and beatmaster Theo Keating with vocalist and lyricist Simon Lord are, for all intents and purposes, an actual band in the traditional sense of the word. Their approach, however, is anything but.

“When we play, it’s sort of a hybrid DJ set that incorporates our own songs where Simon does the vocals live, but we put them in context with tracks that people know and are very dance-able, rocking tracks,” says Keating. “So it’s not just coming onstage cold, with people going, ‘Who the fuck are you?’”

While Keating and Lord shift back and forth between the roles of DJs and musicians over the course of their live sets as a means of integrating audiences into their own work, the duo are in no shortage of sonically and emotionally resonant material that can stand on its own both in dance clubs and on iPods. With the release of their debut self-titled album, former Wiseguys member Keating and former Simian vocalist Lord show their own musical prowess while challenging all preconceived notions of what it means to be a pop artist.

“The concept of pop has really been soiled and stigmatized, when at its core it can just be an umbrella for really great songs that a lot of people like that can still be adventurous,” says Keating. “A lot of music that you take for granted as classic pop music now, when you reevaluate it, you think, ‘that was pretty far out at the time.’ Since then it’s become part of the fabric of familiarity, but at the time they were doing some radical things, and there’s no reason people can’t still push it along.”

Echoing these sentiments, Lord continues, “With lyrics, there seems to be this snobbery that, if you have ideas, it can’t be a pop song. A pop song has to be stupid and inane, where certain words get turned over and used again and again. Why not use some words that aren’t normally said in pop songs? It’s a fun thing to play with, and I think people shouldn’t be scared of it.”

While both Keating and Lord have enjoyed success with their respective past projects in their native U.K., they’re both enjoying the relative anonymity being in the states offers them now. That said, neither is opposed to finding similar success here, though they’re not about to compromise their artistry in order to get it.

“The ultimate balance is to maintain integrity and do what you want to do with a lot of people liking it, which is what everyone dreams of, I guess. If it works, it works, and if it doesn’t, you at least have some records you’re glad you made,” says Keating.

“I want people to get that you can have electronic music that can be danceable and can be moody, and that great synths and melodies are mutually exclusive to great lyrics and ideas. That two people who come from quite different backgrounds with a few common areas can form something a bit different from what else is out,” he says, adding with a wide grin, “Like Voltron, kind of.”