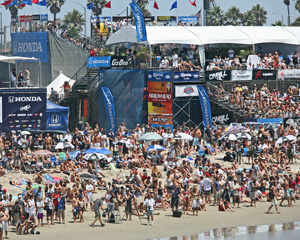 The world’s largest professional surfing competition returns to Huntington Beach on July 18, when the Honda U.S. Open of Surfing will feature the world’s best surfers on the ASP World Tour and local shredders vying to earn a spot on the tour. For the past three years, Americans have claimed the throne, including C.J. Hobgood’s championship run in 2007.

However, the United States will face stiff competition, as the pool of international shredders dominated this year’s World Tour. Frenchman Jeremy Flores, who claimed second place in last year’s Huntington Beach event, will be looking to end the Americans’ streak.

The world’s best skateboarders, BMX and FMX riders will also be featured at the U.S. Open, which is considered the only six-star ASP event in North America. The Honda U.S. Open of Surfing (presented by O’Neill) is celebrating its 15th anniversary this year and anticipates drawing more than 400,000 spectators.

Competition will commence on July 18 and continue through the championship event on July 27. The event will be televised on Versus, as well as by local affiliates of ABC, NBC and CBS.

Fans will also have a variety of musical performances to enjoy during breaks in the competition, which will take place in the 14-acre sponsor village. The U.S. Open consists of men’s and women’s competitions, a junior pro event, a supergirl junior pro event and a long board competition.