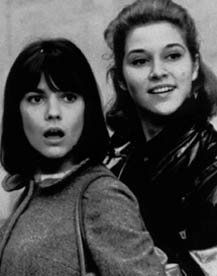 Nearly 40 years after its original release, Jean-Luc Godard’s masterpiece Masculine Feminine remains unequivocally and uniquely Godard: simultaneously brilliant and frustrating, gorgeous and gritty, humorous and pained. For new audiences or cinephile veterans, Masculine Feminine provides the very best movie-going experience, rendering the drive home from the theater either furious or blissful, but truly different than ever before.

A landmark film in the career of auteur Godard and the post-war French New Wave cinema, Masculine Feminine renders a lovingly absurd portrait of 1960s Paris and the social and sexual revolution centered in the nation’s youth. Paul (Jean-Pierre Léaud) is a communist-leaning opinion pollster, prone to introspection yet susceptible to wild outbursts of indignation, who clumsily courts Madeleine (Chantal Goya), a childish pop singer.

Godard’s screenplay foregrounds a paradoxical blend of intense realism and bizarre non sequiturs. Forming the heart of the film, genuine conversations between the sexes are tense but lighthearted, and Godard relies on long camera takes to showcase the talents of Léaud and Goya. Each interchange features halting speech and unsettling pauses that truthfully reflect a probing, unsure exchange. Here the anxieties of romance and the irrepressible energy of youth collide on the enduring celluloid frame.

All works of artistic genius, however, contain their share of madness, and Masculine Feminine abounds with frustrating ambiguity. Godard interrupts Paul and Madeleine’s intimate café chat to show another couple arguing as the woman suddenly pulls out a gun and shoots the man. A mugger turns his knife upon himself and commits suicide, with no explanation given. Real-life French film star Brigitte Bardot appears as herself, practicing lines in a restaurant booth, and then inexplicably disappears moments later.

The timing of Rialto Pictures’ re-release of this new 35mm print with fresh subtitling is culturally auspicious. While the black-and-white photography and sexual frankness have aged, Paul’s youthful confusion and revolutionary spirit remain strikingly relevant and undeniably incisive. As Paul questions the path of his life, struggles to understand women, protests invasive American military action, and searches for tenderness in a world seemingly gone mad, Godard prophetically reminds us that the trials of the curious spirit are timeless.

Masculine Feminine will be playing from Feb. 11-17 at the Landmark Nuart Theatre in Los Angeles.