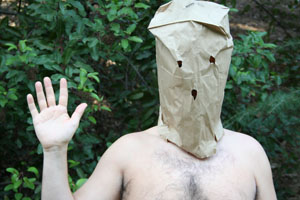 Following the success of their award-winning debut, 2005’s The Puffy Chair, the indie film community gladly anointed Jay and Mark Duplass as their very own Coen brothers. With Baghead, the brothers return to the same formula that made them critical darlings.

Shot on a handheld camera with unknown actors and a miniscule budget, the film is a spoof of campy ’70s and ’80s horror down to the tongue and cheek logline: When four out of work actors head off into the woods to write the next great American screenplay, they soon realize their story about a murderous villain with a bag over his head is more fact than fiction.

After viewing Baghead, it’s shameful to even compare the brothers to the Academy Award-winning writer/director team of No Country for Old Men. Jay and Mark Duplass are a creation all their own.

Movie Reviews
With a return to Westerns, ‘Cry Macho’ is a sunset rodeo for Clint Eastwood at 91
66 views