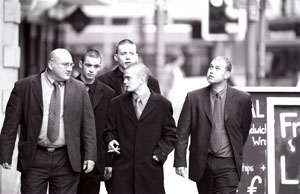 Did you think America (or New Jersey, for that matter) had a lock on creating gangsters? Nope, it’s an international phenom.

A Very British Gangster follows the (actual) trials and tribulations of Dominic Noonan, England’s own version of Tony Soprano and an “out-of-the-closet gay thug.” Director Donal MacIntyre, an investigative reporter, went on the DL Donnie Brasco-style for 10 years and presents three of them in his documentary.

Learn from Noonan, a man who legally changed his last name to Lattlay Fottfoy, an acronym for his family’s motto: “Look after those that look after you, fuck off those that fuck off you,” and who, while in solitary confinement, orchestrated an April Fool’s Day ‘glue down,’ a super-glue assault on the prison locks.