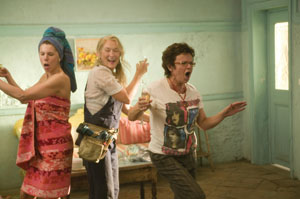 After the amazing success of the Broadway musical, it was only a matter of time before “Mamma Mia!” made its way to the big screen, following other big screen successes like Chicago, Dreamgirls and Hairspray (the second movie that was based on the musical, not the first one upon which the musical was based).

But what exactly makes ABBA so timeless? Because even today, 30 years later, you can still hear their songs at bars and clubs – and not just on disco nights. As someone who has bartended hundreds of wedding receptions, I can attest that “Dancing Queen” is one of the most-played songs at such events.

I challenge you to listen to “Dancing Queen” or “Take a Chance On Me” or “SOS” and see if you don’t start humming along or tapping your foot. With a whole catalogue of catchy, danceable music, it’s no wonder that “Mamma Mia!” was a success.

The ABBA catalogue, on the other hand, doesn’t have quite the ’70s-ish sound that might relegate them to the oldies backburner with some of their contemporaries. This can partly be attributed to their wall-of-sound technique of layering the harmonies of their vocalists.

It doesn’t hurt to have catchy tunes, which ABBA had, but so do many other acts. I once watched a VH1 special, and even KISS’ Gene Simmons was extolling the virtues of ABBA’s harmonies. That’s not something that just any act can replicate – musicians know this. It just goes to show that no matter the genre or era, good music knows no boundaries.