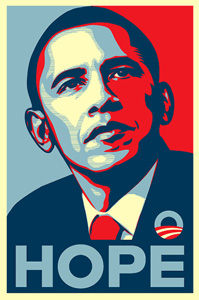 Take a walk down Venice Beach this upcoming weekend and you’ll see hundreds of shirts with the image of spring/summer 2008: Barack Obama as limned by Shepard Fairey.

The artist, best known for his “Andre the Giant Has a Posse” sticker campaign, has always done political work. Sales of his pieces support Darfur, Guantanamo detainees and the West Memphis Three. Another of his images, War By Numbers – a girl holding a rose with a grenade vase – splits its revenue between a U.S. and Iraqi children’s fund.

Believing Obama to be the nepenthe this country needs, Fairey created a poster of the Democratic nominee. Fashioned in a social realist style, the initial steely red, white and blue print contained the artist’s Obey logo (Andre the Giant’s face in a star) within Obama’s logo (an “o” with three red stripes, a rising sun evoking a new day). With this poster, limited to a run of 350, selling out in minutes, the artist released a second print with the word “Hope” below the candidate and the Obey icon removed from Obama’s button.

“I included the Obey logo in the first version because I had no idea if the print would sell well, but knew that my fans were more likely to buy it if it were Obey branded,” Fairey. “I only sold the posters to raise money for a larger poster campaign.”

The HOPE version, an edition of 600 priced at $30, sold out in minutes as well. And with 100 percent of the proceeds going back into his Obama campaign, Fairey printed an additional 16,000 posters for nationwide distribution.

Since then, his agitprop image has been painted on the Obama Campaign Headquarters in Houston, made cameos at primaries and caucuses and currently decorates numberless bumpers. Fairey also donated an Obama illustration requested by the candidate’s campaign, which was sold on the Democratic nominee’s Web site.

Shirts with the image are still available at Urban Outfitters and knock-offs on Venice. (P.S. Want to get a free shirt while simultaneously watching a grown man cry? Approach one of the bootleggers on Venice Beach with a camera and say you represent Shepard Fairey.)