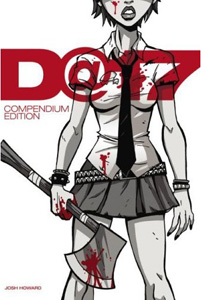 This volume collects the entire original trilogy of Josh Howard’s Dead@17, now expanded and revised. It also includes an introduction by Howard, artwork galleries and a section dedicated to Dead’s fans.

The series follows Nara Kilday, a teenager who is stabbed to death by an unknown assailant. Nara’s best friend, Hazy, tries to cope but notices strange things happening – like being attacked by zombies only to be saved by her dead best friend wielding an axe. Nara and Hazy band together with other friends, meeting various shadowy figures as they unravel an otherworldly conspiracy, kick ass and deal with their complicated social lives as high schoolers. It bares a strong resemblance to “Buffy,” but the storytelling and manga-influenced art are solid enough to keep you interested.