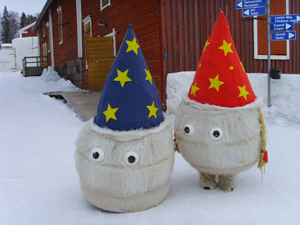 The Arctic Circle might not be the first place you think of while planning a getaway – and that’s exactly why it’s one of the best places to indulge in chilly fun. Much of the Arctic is unpopulated, but in the part of Northern Europe called Lapland, you’ll find the indigenous Sami people welcoming and eager to share their culture with visitors.

I took a flight from Helsinki to the small city of Kemi. After getting thoroughly outfitted (snowmobile suit, boots, gloves, face mask, helmet) for a few days of outdoor activity, I met up with Alexie, a young Russian who’d be my guide and interpreter for the duration of my stay.

Joined by two other adventurers, we piled our gear into a van and headed for the village of Simo, arriving at the Wanha Pappila Inn just in time for lunch. While we ate, Alexie laid out the schedule for the rest of our day, which would begin with a little ice fishing.

Simo is located on the Gulf of Bothnia and Wanha Pappila is right on the shoreline, so we had only a brief trudge through the snow until we were standing on the frozen gulf. Using a giant hand-cranked auger we drilled holes in the ice and started bobbing our artificial lures in the water.

Alexie had brought along a comfy reindeer pelt for each of us to stretch out on and a hot thermos full of whisky-laced fisherman’s grog so none of us minded that the fish only teased us by taking a couple of nibbles. After fishing we piled into a snowmobile-pulled sleigh and headed out over the ice to an island where we had planned to do some snowshoeing, but where we opted instead for a roaring fire and more grog.

After all, the next day our Lapland safari would begin in earnest with a 120-kilometer snowmobile ride. A good dinner and a steam in a traditional Finnish smoke sauna and it was time to retire to our plush cottages to rest.

Soon it was morning and our convoy of snowmobiles was off to Haparanda, Sweden, just across the border from Tornio, Finland. The first couple hours of our journey we could really speed along, zipping across the frozen gulf on relatively smooth ice.

Our first stop was at the LumiLinna SnowCastle where we were met by greeters in snowball costumes before touring the castle and its amazing ice sculptures, including a life-size carving of a Harley chopper and a fully-functioning ice bar. Next we went to a designated spot on the gulf and watched the icebreaking ship Sampo arrive. Our visit to the icebreaker included an hour-long cruise with lunch, a tour of the bridge and engine room and at the end a chance to don a rescue suit and splash around in the Arctic water adjacent to freshly broken ice.

Roaring off to Sweden we would make only one more stop, this break occurring at a kota, a traditional Sami dwelling where we were able to warm up with coffee and hot juice made from local berries. The rest of our route to Haparanda wove through village and woods, down trails and over streets, through logging operations and most fun of all, over a good stretch of rutted road that would make any BMX-er cry out in joy.

Before our safari would end a couple days later, Alexie had us mushing huskies, racing ice carts for prizes (imagine go karts spinning out on a snowy track), driving a reindeer sleigh and zooming down a narrow, snow-covered path at tremendous speed as a professional racer put an Opel through its paces.

For a grand finale, Alexie took us right to the Arctic Circle line to meet his close personal friend, Santa Claus. We didn’t ask the old man for anything though; Our Lapland safari was the best ever of presents.