The Watson TWins: Somewhere Between Appalachia and Hollywood Hills 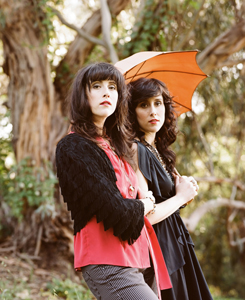 Like the Wonder Twins, Zan and Jayna of the Hanna-Barbera animated television series “Super Friends,” identical twin sisters Chandra and Leigh Watson’s powers activated to form the shape of the Watson Twins in 2006 with the release of their Southern Manners EP. Their first album nearly coincided with Jenny Lewis’ album, Rabbit Fur Coat, on which they performed back up duties.

With that one-two punch, the Watson Twins pulled up a chair at the indie-folk table alongside Lewis, Devendra Banhart, Iron and Wine and Joanna Newsom. Chandra sees their place in the music world a little differently than merely a wave of folk.

“Maybe a feminine wave,” she speculates. “There’re a lot more female artists now. I see a lot of women with different styles and great at what they do in the indie world.”

“Jenny [Lewis] is a great singer – part of that,” she continues. “Also Cat Power, Neko Case and Martha Wainwright. I like how they control the reigns of their careers. They are sexy without being manufactured – without feeling the pressure to be a pin-up model.”

I spoke with Chandra as she and Leigh drove through Virginia on a road trip to their next gig. As to what the twins are listening to now as they cruise from their family home in Louisville, through Tennessee and on to Virginia: “KaiserCartel is really great. Death Cab for Cutie is good road trip music.” Leigh also likes Robert Plant, Wilco and Andrew Bird as favorites for listening to in the car on long 15-hour drives.

The sisters began singing in a church choir around the age of eight in Louisville, Ky. Chandra recalls, “The church automatically put us together, and we instinctively knew how to harmonize.”

Around age 16, Leigh first picked up guitar, and the girls started taking lessons.

“I remember learning an R.E.M. song; also some Go-Go’s, Bob Marley and the Grateful Dead, of course,” says Chandra.

Their journey from Kentucky to California mostly hinged on “a twist of fate.”

As Chandra tells it, “After graduation [from college], we drove around the states. After the trip was over, we made a pact to end up wherever a door opened up.”

As it turned out, a friend in Los Angeles had a place for them to stay in Burbank. From there, the Silver Lake music scene proved only a short leap.

Chandra says, “We wanted to be somewhere where more music was happening – Silver Lake was the area we wanted. We’ve been in that neighborhood ever since.”

Having formed the group Slydell, the Watsons did a residence at Spaceland and ended up doing a show with Rilo Kiley (Jenny Lewis’ band).

With a little success and experience under their belt, the Watson Twins felt ready to embark on a full album, aiming for a little more cohesion with their sophomore effort, Fire Songs.

“We shifted to a mind set of wanting it to feel like a record,” Chandra says.

More instruments fill out the women’s beautiful vocals with tracks like “Fall,” “using cello to make it really unique and evoke the feeling of the song.”

Having ventured a long way from their bluegrass roots, iTunes calls the group “more Hollywood Hills than Appalachia.”

Chandra replies, “I don’t really know what the Hollywood Hills are like. I’m attracted to music that is organic and has a cohesive sound. There are elements of Americana in our music, but I don’t know that I want to be Appalachian or Hollywood Hills. Maybe somewhere in the middle.”