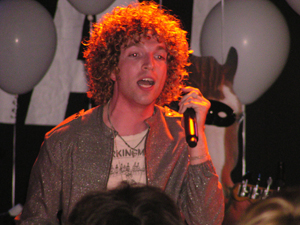 Hot Hot Heat, hellogoodbye, Soul Asylum, Mickey Avalon, Everclear and Camp Freddy were just a sprinkling of bands coming together to celebrate the founders of the Sunset Strip. Lou Adler, Mario Maglieri and Elmer Valentine, music industry icons who helped build the legendary Strip, were given tribute with a three-day party filled with sweet tunes and fans ready to shake their asses.

The red carpet festivities brought out a bevy of musicians and celebrities, including Cheech Marin and Tommy Chong announcing a reunion project, and Michelle Philips, Slash and Mark McGrath paying tribute to the trio with notorious stories of sex, drugs and rock ’n’ roll inspired by the infamous clubs of the Sunset Boulevard.

Musical highlights of the weekend included a rousing performance at the Roxy with Hot Hot Heat, hellogoodbye at the Keyclub as their devoted fans bombarded the stage with dance and Camp Freddy busting out cover favorites from Oasis, the Doors and Cheap Trick at the “Wasted Space” free concert. Newcomers the Hatch gave an impressive Keyclub performance that made peeps turn their heads and whisper, “What’s the name of this band again?”

Celebrity music heads such as Kiefer Sutherland, Jesse Metcalfe, Shane West and Chris Noth were sighted strolling the clubs, while honoree Maglieri stayed true to his place in Hollywood history working the doors at the Whisky, overheard saying, “Where else would I be on a Friday night?