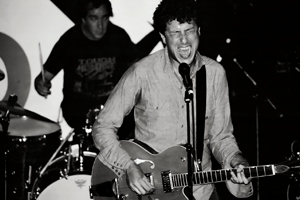 Even without second guitarist Steve Lambke, whose damaged hand restricted him to the microphone on “Shower of Stones” and a quick fling with Will Kidman’s keyboard, Constantines were flawless as usual.

Finally, there was an opportunity to see them play “Insectivora,” with Dallas Wehrle’s bass replacing the horns of the song’s noisy climax on Shine a Light, and “Young Offenders,” with Bryan Webb’s guitar spread over a wider range of space than on its recorded counterpart, as the set closer we didn’t receive at Spaceland two years ago.

It’s the details that make the band – Wehrle’s in man-stance when his bass isn’t being raised proudly. Kidman is an absolute asset to the band’s energy, barely able to contain himself at the seat of an instrument that restrains most. And Webb pours every ounce of himself into his words, straining and snarling with the slightest hook in his lip.

But all unexpected excitement lay in the show’s sausage fest of an encore, for which supporting act and Canadian comrades Ladyhawk joined in on “Street Fighting Man,” and managed to get Webb dancing in a red tank.