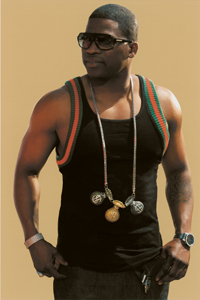 From growing up in Mississippi, being homeless on the streets of New York and Atlanta, taking a stand for hip-hop music in front of Congress to all the accolades and then the death of his father last year – it’s only fitting that Banner would allow art to imitate life and name his album The Greatest Story Ever Told.

“As far as my [album] title, I don’t know anybody in the rap game whose story is more capturing than mine. Defending hip-hop in front of Congress? That ain’t no shit that regular rappers can say they do. Even if we’re not speaking on the title, we’re talking about the man behind the title. My story is the greatest story ever told.”

On Scrutiny by Society:

The type of man that I am can’t help but reflect in my albums to a certain degree because I am a strong man. But music is music. They don’t try and make Denzel Washington stick to what he does in his movie roles. They don’t hold Martin Scorsese to every script that he writes or every movie he produces or directs.

On Fact vs. Fiction:

One of the problems in black music today is that we try to make our music emulate our life, everybody try and keep shit so real. It’s just a song. It’s just an album. At the end of the day, the virtue of what type of man I am has nothing to do with the type of album that I’ve made.

That’s the way that society tries to put us in the box by making us say that we so real; then when it comes to us going to court they can point the finger at us like “dude listen to your song, you say you so real, that’s the reason we can convict you based on what you say.”

On the Death of Hip-Hop:

The Greatest Story Ever Told is currently available. For more information, visit www.david-banner.com.