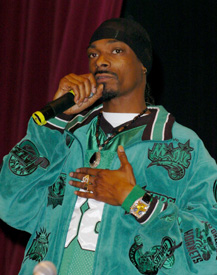 Originator of the breakbeat, D.J. Kool Herc extended the "break" sections of songs, the part of the song without vocals, only percussion or instrumental. He used two turntables that each had a copy of the record.

The role of an emcee in early hip-hop was to introduce a DJ at parties and keep the crowd excited. Over time, the role grew to rhyming lyrics over the DJ’s music.

Breakdancing is an acrobatic dance style developed in the late ‘70s in New York and Los Angeles.

Often illegal, spray can art was present in the ‘60s in Philadelphia and made popular in New York because of elaborate drawings on its subways.

Hip-hop arose in the 1970s in The Bronx borough of New York City. By the end of the decade, it had spread to many major cities in the United States, developing into various regional styles.

D.J. Kool Herc, considered the godfather of hip-hop, begins DJ-ing block parties in the Bronx. He creates what is known as a breakbeat using two copies of the same record to extend sections in songs for breakdancers to dance. He also creates the fast emcee crew called Kool Herc and the Herculoids.

Hip-hop’s recorded history is made when the Sugarhill Gang releases the hit single "Rapper’s Delight" and The Fatback Band with King Tim III release rap records.

Kurtis Blow releases "The Breaks". It becomes the first hip-hop single to be certified gold.

The first non-black hit to feature rapping is Blondie’s "Rapture" as Debbie Harry raps on the group’s hit release.

Grandmaster Flash and the Furious Five release "The Message". It is the first record to deal with social issues in poor communities. Afrika Bambaataa and Soul Sonic Force release "Planet Rock", mixing rap with synthesized electronic sounds inspired by the German band Kraftwerk.

Run DMC release their album "Raising Hell". It features a hip-hop remake of Aerosmith’s "Walk This Way". The record becomes a crossover hit. The Beastie Boys release their debut album, "Licensed to Ill". On Def Jam. It beomes the first rap album to reach No. 1 on the charts.

West Coast gangsta rap rises into the mainstream as hip-hop continues to grow.

De La Soul releases their debut album "Three Feet High and Rising". It is considered one of the first albums in the alternative rap genre. The Miami group 2 Live Crew releases their third album, "As Nasty As They Wanna Be". It becomes the first album to be deemed obscene in the United States.

Dr. Dre, a former member of NWA, releases "The Chronic". He produces a new sound called G-funk. Arrested Development releases their hit album "3 years, 5 months and Two Days in the Life of…" It opens the door for other southern rap groups to achieve mainstream success.

The Wu-Tang Clan emerges during the reign of West Coast rap with their release of their hit album "Enter the Wu-Tang (36 Chambers)".

West Coast rapper Tupac Shakur and East Coast rapper Notorious B.I.G. begin feuding, marking the beginning of the rivalry between the two coasts. In September, Shakur is shot in a drive-by after attending a boxing match in Las Vegas. He dies a week later.

In March, Notoriious B.IG. is killed as he leaves a Vibe magazine party in Los Angles just weeks before the release of his second album "Life After Death".

Lauryn Hill releases "The Miseducation of Lauryn Hill". " She becomes the first woman in Grammy history to be nominated for 10 awards. She wins five.

Eminem wins the Grammy for best rap album for "The Slim Shady LP", becoming the first white rapper to win the category.

Outkast earns with album of the year honors at the Grammys for "SpeakerBoxxx/The Love Below".