The Maine: Your Guilty Pleasure for the Summer 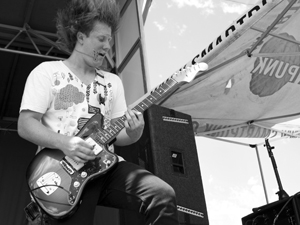 From signing to Fearless Records, a debut release produced by Matt Squire, a stint on this summer’s Warped Tour and an opening slot on the Soundtrack of Your Summer Tour, the past eight months have certainly been a fairytale whirlwind for the Maine. And let’s not forget that the band is less than two years in the (official) making and none of the members are old enough to buy their own drinks at all of the shows they will be playing this summer.

The solid and loyal fan base the Maine has amassed through their dedication to keeping an open line of communication with their fans through MySpace was certainly a factor allowing them to play the main stage at Bamboozle this past year – something guitarist Jared Monaco “would have never saw coming a year ago.” Even with so much on their plate now, the Maine maintains true to the roots of their success: staying up “until 3 a.m. commenting back every kid on MySpace,” doing “whatever it takes to not stop talking.”

Having overcome the disadvantage of having to “wait on everything just because of high school,” the Maine have finally embarked on their first nationwide tour, supporting Boys Like Girls, Good Charlotte and Metro Station. This will be a crucial tour for the band, now faced with the task of translating themselves from viral to virtual and impressing on stage.

The inexperience on the road was no doubt visible (but understandable) on their second day of Warped Tour in San Francisco, with inevitable displays of naiveté reminiscent of a garage band practice session. The positive energy of the set was undeniably present though; this will be the summer where they earn their stage chops, in front of hundreds of screaming fans no less.

The pressure is on in the ever-fickle music scene to keep the momentum going and to follow through on all the hype that has built up with their debut, Can’t Stop Won’t Stop. The album itself is nothing groundbreaking in today’s excruciatingly oversaturated pop punk market, with content and sound striking very similar and familiar notes to bands past. But it is the attitude towards the music – they are “not trying to reinvent [themselves] to be a different band, [they] just want to make a positive album that kids can hopefully feel good about when they listen to it” – that compels me to accept the music for what it is and admit to an aural guilty pleasure, with hooks and melodies that will surely become part of the soundtrack to my summer.