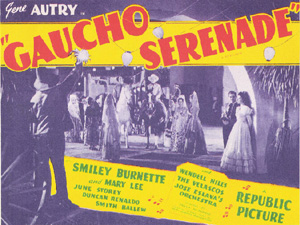 Even though America’s birthday was a few weeks ago, no amount of hot dogs and bottle rockets could celebrate her 232nd year better than a good old-fashioned al fresco dinner and cowboy movie at the Gene Autry National Center in Griffith Park.

By paying homage to a great purveyor of what has become the iconic American image, every Tuesday in July, his namesake museum, the Gene Autry National Center presents its “Dinner and a Movie” series, complete with a high-class courtyard meal, curator-led gallery talk and a projection-screen showing of one of Autry’s 98 western films. This year, the four movies chosen connect Autry’s mid-century work with the undeniable intersection of politics and cowboy culture that’s currently being showcased in the museum’s exhibition Cowboys and Presidents.

So, if one day wasn’t enough patriotism for the love of your country get to Griffith Park for a showing of 1940’s Gaucho Serenade, where the Singing Cowboy, Champion and usual sidekick Smiley Burnette (as Frog Millhouse – best name ever!) make a cross-country trip that finds them picking up a British-accented boy who doesn’t know his father is in San Quentin and a runaway bride and her sister.

The low admission price ($18) includes dinner from the Golden Spur, discounts at the museum store and a rare outdoor store screening of this restored American western. Stop by early and check out the series’ thematic inspiration, which includes photos of Reagan with the Lone Ranger and young Billy Clinton – chaps, bandana necklace and all – straddling a pony. Then tell your country “happy belated birthday” and watch a film that helped turn the image of a man on his horse into the archetypical symbol of American individualism.