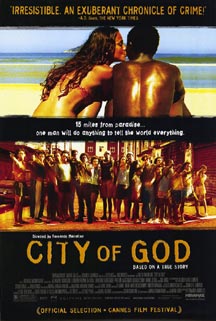 City Of God, based on the book Cidade de Deus by Paul Lins, is an eye-opening film that paints the harsh reality of life in the favelas (ghettos) of Rio de Janeiro, Brazil. Director Fernando Meirelles unfurls a chilling story of how drugs and crime take control of the Brazilian housing projects (spanning from the late ‘60s to the early ‘80s) and how countless lives were lost, both physically and spiritually.

City Of God follows many characters, but focuses mainly on two: Rocket, who aspires to work his way out of the favelas by staying in school and becoming a photographer; and Lil’ Dice, who aspires to become the biggest, baddest criminal in the ‘hood. Crime and drugs appear to be the easiest, most seductive way for kids to make a fast buck——it’s a dreamy life, often romanticized. Yet as the neighborhood is ignored by police (who are often paid "hush money" by the drug lords), a zombie army of drug-addicted, gun-wielding teens take control. Soon, murder becomes the expected part of life.

Nominated for various awards, including a Golden Globe for best foreign language film, City Of God presents many disturbing, unforgettable moments. The movie (based on a true story) is filmed in documentary style, with cinematographer Cesar Charlone’s creative camerawork helping to bring a heightened sense of reality. Non-professional actors picked from the communities of Rio also do one hell of a job making the audience believe in each and every character. Although the over-the-top gun violence and graphic scenes occasionally seem gratuitous, it is unlikely that anyone watching City Of God will come out of the theater emotionally unaffected. An important yet disturbing film that deserves attention, it may make those that choose to watch realize that the grass is actually greener on your side of the fence.